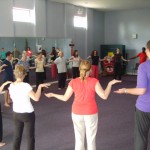 (NaturalNews) Getting older means you will not be as mentally sharp and, in fact, your brain will shrink. It’s just the way life is and there’s nothing you can do about it, right? Wrong. Now it appears we can take control of brain changes and even make our brains larger, not smaller, as we age and cause electrical connections to zip along at a faster rate to improve thinking and memory. The key is meditation.

This was startling– and important — because brains normally shrink with age, a process they may explain memory and other cognitive problems experienced by elders. More recently, scientists at Massachusetts General Hospital (MGH) concluded that an eight week mindful meditation practice produced measurable changes in participants’ brain regions associated with memory, sense of self, empathy and stress (http://www.naturalnews.com/031228_m…).

Now comes even more proof that meditation does something profound, and beneficial, to the human brain. A follow-up study by the UCLA team just published in the online edition of the journal NeuroImage shows that people who meditate have stronger connections between brain regions. What’s more, they have far less age-related brain atrophy.

What’s the significance? Stronger connections increase the ability of electrical signals in the brain to work rapidly — suggesting a whole host of thinking and memory benefits. Also, these effects were not just found here and there but throughout the entire brains of meditators.

The study involved 27 active meditation practitioners with an average age of 52, along with 27 matched control subjects. Both groups consisted of 11 men and 16 women. Over all, the meditators had been practicing various styles of meditation, including Shamatha, Vipassana, Zazen and others, for five years or longer.

The investigators found that the differences between the brains of research subjects who were meditators and the brains of non-meditators in the control group weren’t limited to a core region of the brain but instead involved large-scale networks of the entire brain, as well as limbic structures and the brain stem.

“Our results suggest that long-term meditators have white-matter fibers that are either more numerous, more dense or more insulated throughout the brain,” Dr. Luders said in a statement to the media.

“We also found that the normal age-related decline of white-matter tissue is considerably reduced in active meditation practitioners.”

“It is possible that actively meditating, especially over a long period of time, can induce changes on a micro-anatomical level,” Dr.

Luders, herself a meditator, continued. “Meditation appears to be a powerful mental exercise with the potential to change the physical structure of the brain at large.”

In other words, there now appears to be a way to take control of changes in the brain which, up to now, have been regarded as an inevitable part of aging. Meditation may keep the brain younger, more fit and make it literally larger and faster working, even as we grow older.