A passionate discourse on the placebo, intention and Yi

Had a discussion with a colleague recently about the so called “placebo effect”. As far as I am concerned, there are three views of this.1. the conventional medical view , 2. the view of the general public and 3. my view.

Wikipedia defines the placebo effect as: is a sham or simulated medical intervention. Sometimes patients given a placebo treatment will have a perceived or actual improvement in a medical condition, a phenomenon commonly called the placebo effect.

So basically it is an action based on lies, deception, smoke and mirrors. It is usually talked about in context of medicine and medical research. What seems to happen is that  a belief in something i.e. perceived medication , can result in an actual physiological change and relief of symptoms in the body. This is generally  the perception of the public as well. My colleague who is an acupuncturist say that new patients actually asks her whether the improvement from the treatment they are going to receive is due to the placebo effect? She feels that the placebo effect is important to her as one of the reason why patient improves with treatment  and also because she does scientific research, she has to speak the same language as others do in the field of medicine and medical and  research An example she gave me was how she was given some painkillers for a headache when she was six years old, as soon as she took the medicine, her headache went. Thus she saw as the placebo effect, as the medication would not have had time to act yet. I would disagree with her on this . Yes, there was a definite physiological change in her body leading to a cessation of symptoms; but there was no deception on the part of  the person giving this to her. This I would call the “intentional effect”. Now, some of you reading this will query whether I am splitting hairs here. What does it matter what we call it as long as the effect is the same?

It does matter. For a start, relationships matter. The karmic outcome of a relationship built on lies and deception is going to be different from one built on respect and understanding. To put it simply, do you trust the person who lie to you or the person who is honest with you?

When a talented racing driver enters a race. He will win if he has the talent and skill, the best car, and lastly, the confidence and intention of winning the race . The Chinese call intention mindfulness or Yi. Another word to describe this is focus. When we have intention backed up by knowledge and skill…..we will always win through. If you have no skill or knowledge, than no matter how positive you are ,you will not win. We hear this sometimes from people who have been told they have cancer and are embarking on a programme of surgery, chemotherapy and radiotherapy. They will be positive and say they will fight the cancer. Yes, having a positive attitude is essential in everything that we do, especially if we are fighting cancer. But all too often, the patient do not do anything else to help themselves while undergoing medical treatment .The answer is usually that the consultant they are seeing has told them they there is nothing else they need to do for themselves. Is it not plausible that to make the body as healthy as possible could help ? For most cancer patients, sadly, it isn’t plausible.

It seems that the placebo effect is often talked in context of illness . Even if taking a sugar pill can fool the body and create  physiological changes, how long does it last? Will the patient eventually get better or will he lose out to the disease process? Why not focus on actually helping to educate patients to get healthy? The reason is because the people working in the NHS are experts in diseases and not health. They don’t seem to understand that unless you know about health, you cannot cure diseases.

It seems to me that some people will always be part of the “placebo effect” group.These people will never ask too many questions, do as they are told, keep taking the tablets, blame everybody else for their woes. Whether they get better or not will have very little bearing on what they actually understand about their bodies or actively done to help themselves. While others will be of the “intention/Yi effect” group. This group of people will find out what they can do to help themselves, make positive changes such as changing their eating habits, taking up Eastern Yoga, Tai Chi , Qigong, meditation; and generally get to know and make a relationship with their bodies. Intention backed up by action will create  real change and growth. The perception and mentality of the people in the above  two groups do not just affect their health but every other aspects of their lives. Which group do you think you belong to? 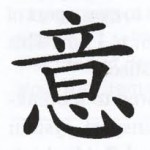